The South Florida Fair & Palm Beach County Expositions, Inc. is a nonprofit corporation 501 (C3) organized and existing pursuant to Chapter 616, Florida Statutes. It has a Board of Trustees comprised of seventeen (17) individuals who are responsible for setting policy and seeing that management of the association is carried out under direction of an executive staff consisting of the President/CEO and at present, two Vice Presidents.

The Fair also has Directors who serve in an advisory capacity. There are presently fifty-five (55) Directors. The Trustees and Directors are non-paid volunteers. The day-to-day operation is the responsibility of the President, Rick Vymlatil, who oversees a staff of over 45 full-time employees.

THE FAIRGROUNDS
Approximately 135 acres comprise the real property commonly referred to as the "Fairgrounds". In 1957, Palm Beach County gave the Fair 100 acres at its present site but later took back 20 acres for the stockade. This contribution was made in consideration of the Fair agreeing to relocate from John Prince Park in order that the County could vie for a state university (PBCC).

Generally, the Fairgrounds is segregated into several pods or tracts: the parking tracts, Yesteryear Village, the Perfect Vodka Amphitheatre, and the exhibit buildings, including the Expo Center and the Agriplex. The space available on the Fairgrounds for trade shows and exhibits exceeds 200,000 square feet. During the annual South Florida Fair, the southern parking tract is utilized as the "midway" containing rides, shows, games, and concessions.

THE EVENTS AT THE FAIRGROUNDS
The main event on the Fairgrounds is the annual South Florida Fair which occurs over a 17 day period, generally in the last two (2) weeks of January each year. Over the past several years, the annual fair has incorporated a theme as a means of stimulating tourism as well as the educational and cultural interest of the residents of Palm Beach County. For instance, "Florida" was featured at the 1998 fair and "Alaska", "Tales of the American West", "New England", "Hollywood", "Having a Ball", "Dreams, screams, thrills, chills", "Party with the Animals", "Washington D.C." and "Las Vegas" were showcased in previous fairs.

One of the greatest aspects of the annual fair is its agricultural and livestock exhibits which clearly provide the greatest variety of such exhibits anywhere within Palm Beach County. Even though agriculture is such a tremendous part of Palm Beach County’s economic base, many school children have never been exposed to it. However, at the annual South Florida Fair, not only can they see and learn all about agriculture, but can even witness a calf being born, or learn how a dairy is operated. The annual fair attracts over 500,000 people through its turnstiles.

However, 650,000 people will attend various events on the Fairgrounds on an annual basis. Besides the 128,000 ft. Expo Center, there are 10 other smaller exhibit buildings along with the Perfect Vodka Amphitheater, Agriplex and Yesteryear Village. These events constitute 250 event days. 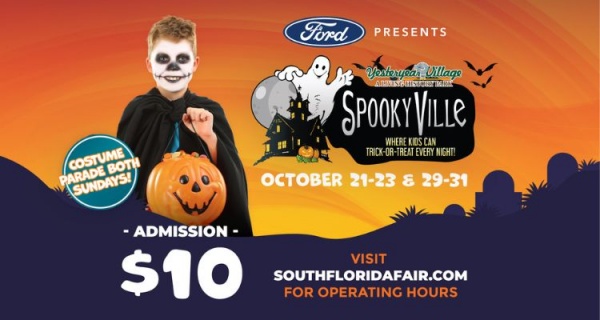